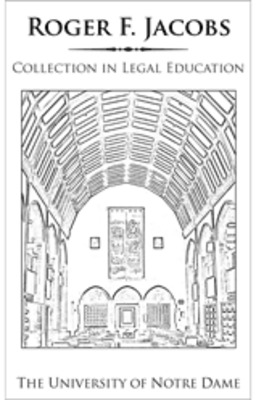 In honor of his skill as a legal librarian, as well as his dedication to the profession and the University, the Roger F. Jacobs Collection in Legal Education was established by the Law School in 2007. Roger came to the University in 1985 as the director of the Kresge Law Library and a professor of law. He became associate dean in 1990. He is now retired, but maintains the titles of professor of law and director emeritus of the Law Library. During his tenure, Roger influenced countless students and faculty with his readiness to help and his fervor for the field. A leader among law librarians, he instilled in students an appreciation for legal research.

Roger’s career took him to the University of Detroit, the University of Windsor, and Southern Illinois University. His last position before coming to Notre Dame was in service to the Supreme Court of the United States as Librarian of the Court.

For the Law School’s scholars and teachers, a knowledge of legal education is fundamental to the successful practice of their vocation. The Jacobs Collection provides Law Library users with a rich source of material on the processes and philosophy supporting the formation of lawyers.