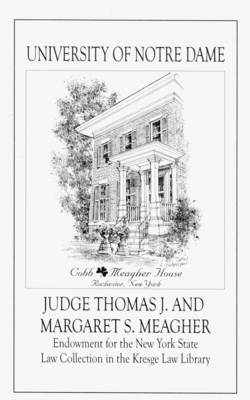 Tom Meagher was always a proud graduate of the University of Notre Dame and his wife, Margaret, shared that pride. This is why Margaret honored her husband’s alma mater and their home state when she created in her will the Judge Thomas J. and Margaret S. Meagher Endowment of the New York State Law Collection in the Kresge Law Library.

Born in Rochester, New York, Thomas J. Meagher was educated at Nazareth Hall and Aquinas Institute prior to receiving his B.A. with honors from the University of Notre Dame in 1936. He earned his L.L.B. from Syracuse University College of Law and was admitted to the bar in 1941.

Judge Meagher established his practice in Rochester, becoming a partner of Francis L. Claus. However, seven years later, he left private practice for a six-year term as Children’s Court Judge. At the time of his election in 1948, Thomas Meagher, the first Democrat elected to that position, was described as “an imperturbable, quiet and straight-thinking student of law and sociology.” He approached his duties with a profound belief in the preservation of the family as a key unit of society. He was a frequent lecturer on the need for social supports and role models for teenagers. After completing a six-year term and losing his bid for re-election, he returned to private practice. In 1956, he accepted the position of administrative director for the State Youth Commission, following a year as special consultant for the group. Two years later, he returned to private practice where, shortly thereafter, he formed a new partnership with Robert J. Edelman. In 1967, he was named by the Appellate Division, Fourth Department, to the Committee on Character and Fitness of Applicants to the Bar. In 1978, he was appointed as the first Family Court hearing examiner following a change in the state law to allow the use of hearing examiners in support cases. Throughout his busy career, Judge Meagher also found time to serve on numerous community groups as varied as the Travelers’ Aid Society, Visiting Nurses Association, Montgomery Neighborhood Center, and Otetiana Council of the Boy Scouts of America. He was chairman of DePaul Services and the Monroe County Bar Association. He was actively involved in the Notre Dame Club of Rochester, which awarded him with Man of the Year honors in 1949.

Margaret (Schrader) Meagher, was a descendant of the Cobb family, a founding family in the Rochester region. Peg was an active volunteer at St. Mary’s Hospital and was president of her Seton Group. She was an avid golfer and, in retirement, she and Tom enjoyed their boat on Lake Ontario.

New York State legal materials are vital for any law library that seeks to support scholarship and the needs of a national student body. The Judge Thomas J. and Margaret S. Meagher Endowment for the New York State Law Collection in the Kresge Law Library supports the acquisition both of new works of analysis as well as of the many continuing publications of legislative and judicial materials emanating from New York. The Meaghers’ generous support will enable the Kresge Law Library to build and maintain a great New York legal collection.