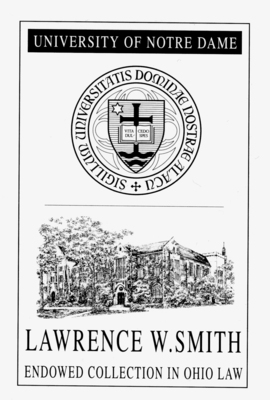 An East Liverpool, Ohio, native and descendant of the city’s founder, Thomas Fawcett, Lawrence W. Smith grew up working at the family-owned and operated Smith Hardware Store. He graduated from East Liverpool High School in 1931 and earned his bachelor’s degree from the University of Notre Dame before returning home to teach in the local school system. In 1941, he received a law degree from Duquesne University and established a practice in East Liverpool, which was interrupted by service in World War II. Serving in the European Theatre of Operations, he received four bronze battle stars for action in Naples, Foddia, Rome and North Apennines. Following the war, he returned home and resumed his law practice.

He and his wife Elizabeth had five children: Lawrence W. III, Cynthia, twin daughters Maureen and Isabel, and Elizabeth “Betsy,” who passed away in 1973.

The Lawrence W. Smith Endowed Collection in Ohio Law supports an important body of state law for students and researchers. The cumulation of case law and statutory materials and the acquisition of new scholarly works analyzing Ohio law add significantly to the Kresge Law Library’s comprehensive collection of American legal materials. The Smith Collection will ensure the ongoing quality of the Ohio law collection in perpetuity.