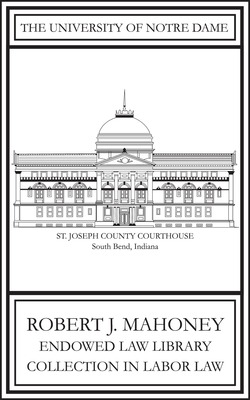 Through a charitable bequest from his estate, John Patrick “Jack” Mahoney Jr. (‘38) established the labor law collection in the Law Library in honor of his brother, attorney Robert Mahoney (’40, ’48 J.D.). Robert was a labor union leader and a former deputy St. Joseph County Prosecutor. Born in Ashtabula, Ohio, he lived in South Bend for more than 50 years, until his death in 1988. He is survived by his nephew, John P. Mahoney, and his five children, the Rev. Robert Mahoney, Maureen Harris, Kathleen Mahoney, Kevin
Mahoney, and Melanie Barth.

Jack Mahoney was a veteran of World War II and served in the Korean War as a Judge Advocate General (JAG). He remained in the reserves until retiring in 1972 as a colonel. In 1950, he opened his law practice in Ashtabula, his lifelong home, where he was also a dedicated supporter of Catholic education. A passionate alumnus, he cherished regular trips to South Bend for football weekends. In addition to this planned gift to the University, Jack was a member of the Edward Frederick Sorin Society and the Order of St. Thomas More.

The Mahoney Collection provides resources for students and researchers in one of the most complex and important areas of legal study – labor law. The laws governing workplaces, unions, international labor agreements, and related topics are constantly expanding and changing. A great legal collection requires constant upgrading of labor law materials- including new electronic resources – in order to fulfill its scholarly obligations, and the Mahoney Collection supports that mission in the Law Library.