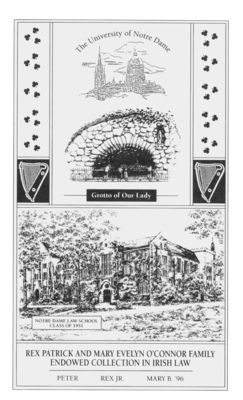 Rex and Mary O’Connor live in Ionia, Michigan, and have three children: Peter, Rex Jr. and Mary, who is a 1996 graduate of Notre Dame. Rex who completed his undergraduate studies at Aquinas College in Grand Rapids, Michigan, received his law degree from Notre Dame in 1951. Engaged in the private practice of law, he also serves as a director of Independent Bank Corporation, as an officer and/or director of other for profit and non-profit corporations. Rex is a member of the University’s Edward Frederick Sorin Society Founder’s Circle and the Notre Dame Club of Grand Rapids.

The Rex Patrick and Mary Evelyn O’Connor Family Endowed Collection in Irish Law has provided the Kresge Law Library with resources to begin an active program of acquiring contemporary Irish legal materials. Recently, Irish studies have greatly expanded in other disciplines active on the Notre Dame campus. The O’Connor Endowment allows our legal scholars to participate in this creative environment of Irish studies.