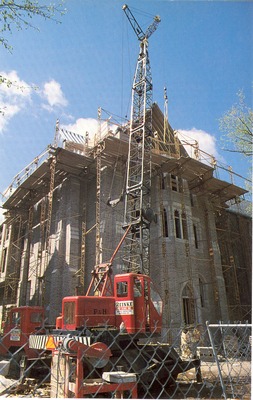 Dean David Link provides a summary of the new building addition in his annual report for the year 1986–1987.

"The most visible development this year was a move toward completion of the major addition to the Law School building. Expanded space for student activities, including Legal Aid offices, space for two law reviews, and the student locker and dressing rooms, were completed and ready at the start of the school year. Offices for the Institute for International Peace Studies and the White Center were ready in August. Movement into the new classrooms occurred at Fall semester break. The new faculty office wing was occupied at mid-year. The enlarged and remodeled library circulation area was ready when the school year opened and further expansion into the greatly increased library spaces occurred throughout the year. The National Institute for Trial Advocacy, which had been relocated outside the Law School building for two years of construction, occupied its new offices adjacent to the courtroom before the Christmas break. The last major part to be completed was the courtroom and, while it was not ready for use during Academic Year 1986-87, it was completed during the Summer of 1987 and ready for the new Academic Year." Read more about the law school here.