2014 Lewers Lecture: Slavery and Tourture in a Global Perspective Human Rights and the Western Tradition

Center for Civil and Human Rights 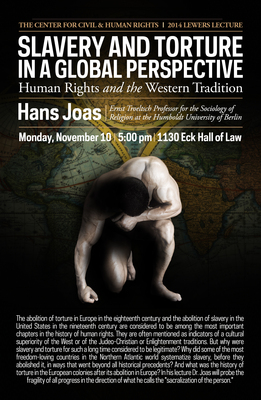 2014 Lewers Lecture: Slavery and Tourture in a Global Perspective Human Rights and the Western Tradition

Hans Joas, Ernst Troeltsch Professor for the Sociology of Religion at the Humboldt University of Berlin

The abolition of torture in Europe in the eighteenth century and the abolition of slavery in the United States in the nineteenth century are considered to be among the most important chapters in the history of human rights. They are often mentioned as indicators of a cultural superiority of the West or of the Judeo-Christian or Enlightenment traditions. But why were slavery and torture for such a long time considered to be legitimate? Why did some of the most freedom-loving countries in the Northern Atlantic world systematize slavery, before they abolished it, in ways that went beyond all historical precedents? And what was the history of torture in the European colonies after its abolition in Europe? In his lecture, Dr. Joas will probe the fragility of all progress in the direction of what he calls the "sacralization of the person."