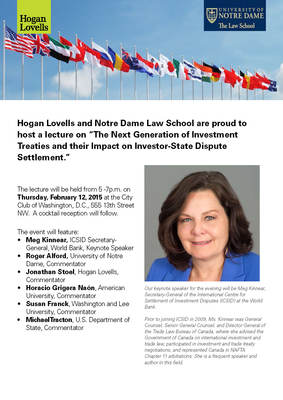 Hogan Lovells and Notre Dame Law School are proud to host a lecture on “The Next Generation of Investment Treaties and their Impact on Investor-State Dispute Settlement.”

Our keynote speaker for the evening will be Meg Kinnear, Secretary-General of the International Centre for Settlement of Investment Disputes (ICSID) at the World Bank.

Prior to joining ICSID in 2009, Ms. Kinnear was General Counsel, Senior General Counsel, and Director General of the Trade Law Bureau of Canada, where she advised the Government of Canada on international investment and trade law, participated in investment and trade treaty negotiations, and represented Canada in NAFTA Chapter 11 arbitrations. She is a frequent speaker and author in this field.