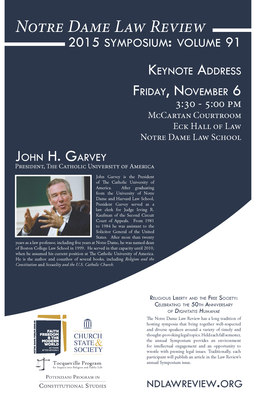 John Garvey is the President of The Catholic University of America. After graduating from the University of Notre Dame and Harvard Law School, President Garvey served as a law clerk for Judge Irving R. Kaufman of the Second Circuit Court of Appeals. From 1981 to 1984 he was assistant to the Solicitor General of the United States. After more than twenty years as a law professor, including five years at Notre Dame, he was named dean of Boston College Law School in 1999. He served in that capacity until 2010, when he assumed his current position at The Catholic University of America. He is the author and coauthor of several books, including Religion and the Constitution and Sexuality and the U.S. Catholic Church.