Civil Rights Movements of the '60's 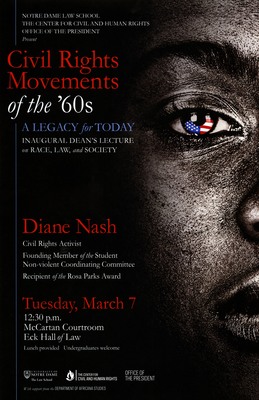 The Inaugural Dean's Lecture on Race, Law, and Society

Speaker: Diane Nash, civil rights activist, founding member of the Student Non-violent Coordinating Committee, and recipient of the Rosa Parks Award. Nash was among the pioneers of the civil rights movement, spearheading grassroots organizing and student activist efforts through the 1960s. Her dedication to social justice brought her the respect of many and the concern of others, including then Attorney General Robert F. Kennedy.