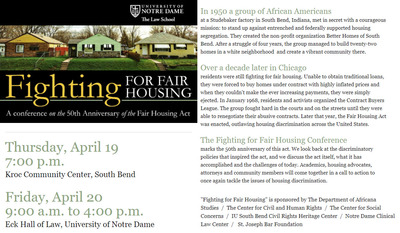 A confrence on the 50th Anniversary of the Fair Housing Act

In 1950 a group of African Americans at a Studebaker factory in South Bend, Indiana, met in secret with a courageous mission: to stand up against entrenched and federally supported housing segregation. They created the non-profit organization Better Homes of South Bend. After a struggle of four years, the group managed to build twenty-two homes in a white neighborhood and create a vibrant community there.

Over a decade later in Chicago residents were still fighting for fair housing. Unable to obtain traditional loans, they were forced to buy homes under contract With highly inflated prices and "When they couldn't make the ever increasing payments, they were simply ejected. In January 1968, residents and activists organized the Contract Buyers League. The group fought hard in the courts and on the streets until they were able to renegotiate their abusive contracts. Later that year, the Fair Housing Act was enacted, outlawing housing discrimination across the United States.

The Fighting for Fair Housing Conference marks the 50th anniversary of this act. We look back at the discriminatory policies that inspired the act, and we discuss the act itself, what it has accomplished and the challenges of today. Academics, housing advocates, attorneys and community members will come together in a call to action to once again tackle the issues of housing discrimination.