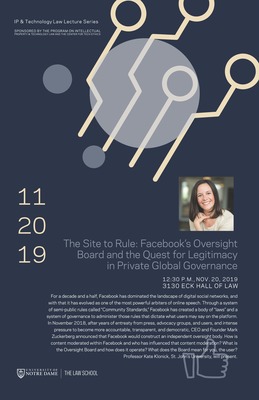 The Site to Rule: Facebook's Oversight Board and the Quest for Legitimacy in Private Global Governance

For a decade and a half, Facebook has dominated the landscape of digital social networks, and with that it has evolved as one of the most powerful arbiters of online speech. Through a system of semi-public rules called "Community Standards," Facebook has created a body of "laws" and a system of governance to administer those rules that dictate what users may say on the platform.

In November 2018, after years of entreaty from press, advocacy groups, and users, and intense pressure to become more accountable, transparent, and democratic, CEO and Founder Mark Zuckerberg announced that Facebook would construct an independent oversight body. How is content moderated within Facebook and who has influenced that content moderation? What is the Oversight Board and how does it operate? What does the Board mean for you, the user? Professor Kate Klonick, St. John's University, will present.