The Inner Morality of Private Law 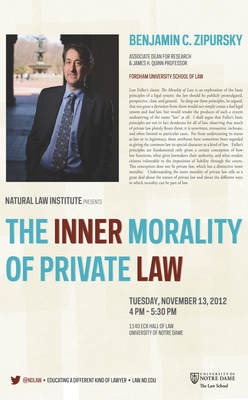 THE INNER MORALITY OF PRIVATE LAW

Lon Fuller’s classic The Morality of Law is an exploration of the basic principles of a legal system: the law should be publicly promulgated, prospective, clear, and general. So deep are these principles, he argued, that too great a deviation from them would not simply create a bad legal system and bad law, but would render the products of such a system undeserving of the name “law” at all. I shall argue that Fuller’s basic principles are not in fact desiderata for all of law, observing that much of private law plainly flouts them; it is unwritten, retroactive, inchoate, and often limited to particular cases. Far from undercutting its status as law or its legitimacy, these attributes have sometimes been regarded as giving the common law its special character as a kind of law. Fuller’s principles are fundamental only given a certain conception of how law functions, what gives lawmakers their authority, and what renders citizens vulnerable to the imposition of liability through the courts. This conception does not fit private law, which has a distinctive inner morality. Understanding the inner morality of private law tells us a great deal about the nature of private law and about the different ways in which morality can be part of law.