A Judge’s Role: A Conversation with Judge Brett Kavanaugh 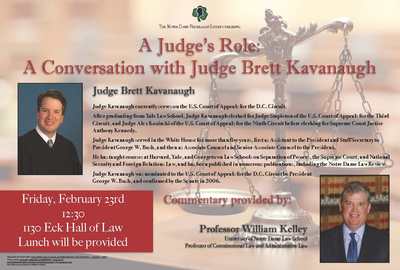 He has taught courses at Harvard, Yale, and Georgetown Law Schools on Separation of Powers, the Supreme Court, and National Security and Foreign Relations Law, and has been published in numerous publications, including the Notre Dame Law Review.

Judge Kavanaugh was nominated to the U.S. Court of Appeals for the D.C. Circuit by President George W. Bush, and confirmed by the Senate in 2006.

1130 Eck Hall of Law, Lunch will be provided