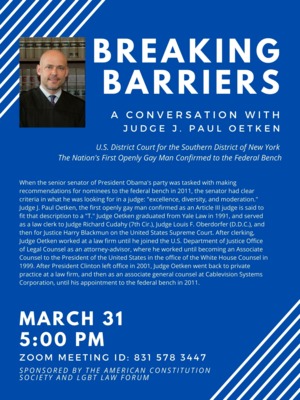 This conversation-style event will feature Judge J. Paul Oetken, U.S. District Court for the Southern District of New York. Judge Oetken has a storied history of public service and is the first openly gay man confirmed to the federal judiciary. When the senior senator of President Obama's party was tasked with making recommendations for nominees to the federal bench in 2011, the senator had clear criteria in what he was looking for in a judge: "excellence, diversity, and moderation." Judge J. Paul Oetken, the first openly gay man confirmed as an Article III judge is said to fit that description to a "T." Judge Oetken graduated from Yale Law in 1991, and served as a law clerk to Judge Richard Cudahy (7th Cir.), Judge Louis F. Oberdorfer (D.D.C.), and then for Justice Harry Blackmun on the United States Supreme Court. After clerking, Judge Oetken worked at a law firm until he joined the U.S. Department of Justice Office of Legal Counsel as an attorney-advisor, where he worked until becoming an Associate Counsel to the President of the United States in the office of the White House Counsel in 1999. After President Clinton left office in 2001, Judge Oetken went back to private practice at a law firm, and then as an associate general counsel at Cablevision Systems Corporation, until his appointment to the federal bench in 2011.